Matt Healy is easily the most obnoxious, yet talented, person in music at the moment. If they had it their way, you wouldn't listen to any other band, as their injection into the media spotlight has been lethal and predictable. With a bucket full of panache, they've chucked their entire talent and wordy-lexicon onto a canvas. That has presented itself has the album, with a can't-believe-he-convinced-the-rest-of-the-band-that-this-was-a-good-idea title: 'i like it when you sleep, for you are so beautiful yet so unaware of it'. Make of that what you wish, but let it be known that it being lowercase is a travesty.

The first track after the intro, geniously titled 'The 1975', is 'Love Me'. It invites people to criticise him, as he criticises the media and society - something I really welcome. He talks of declining standards of what we accept, which is meant in both musical terms and in the UK. He references the Kardashians in the lyrics ("caught up in fashion, Karcrashian panache and a bag of bash for passion" is a fantastic lyric to hear), and David Bowie's 'Fame' and 'Fashion' in the guitar and overall 80s feel to the song. It's a great introduction to the new, slightly more pop sound that the band have clearly worked hard on.

'UGH!' is next, with an infectious guitar line that invites you in and continues throughout the whole song, as Matt muses over, again, what he hates about the media and his own demons and struggles with drugs. The subject matter isn't really hidden in this if you can get past his sometimes obtuse delivery in chunks of lyrical content, which does not happen on the first listen. Unlike with 'A Change of Heart', which slows the pace considerably, talking about how small breasts can be an issue in a relationship, and how taking photos of salads and putting them online is a bit shit. The girl in the narrative says to the recipient they "look like shit and smell a bit", and used to look like a face of a magazine, now just looks like anyone. It's a lugubrious tale indeed, and the simplest song on the album musically and to understand, similar to the later track dedicated to his grandmother, 'Nana'. The lyrics are touching, and reference his view on heaven, but nonetheless wishes she could hear him.

Elsewhere on the album, tracks like 'She's American' and 'The Sound' advance the sound of the first LP from the band. The guitar is catchy, almost copying what riffs they've done before. Challenging his own issues once more on 'She's American', he references his own breakdown on stage in 2014 where people commented that he'd lost it. The song acts as a self-referential come down from a massive drug binge. 'The Sound' attacks - and quotes in it's brilliant music video - it's critics from the first album. A positive and uplifting song about love in the chorus, is interspersed by comments during a relationship with someone who hates his shoes and his tunes, but still would move in. The brilliant thing is that all the quotes in the songs lyrics over the album are probably direct quotes, and someone has actually said all these ridiculous things.

The best moments on the album come from when they bravely try to advance some of their edgier aspects to the band. The synthetic sounds found on 'M.O.N.E.Y' and 'Menswear' are brought back with plenty of electronic drums and saxophone in a delicious blend of music input on 'If I Believe You'. It's truly fantastic, and provides, within the first five tracks, a huge amount of variety already, more so than other bands would have over an entire album or career. The following interlude, 'Please Be Naked', acts as a statement of intent with piano throughout and odd samples of what sounds like coffee cups being crushed and doors being shut. It presents itself as "please be naked, I am fantastic at what I do, listen to this", which is just what you expect from the frontman of a band that is outrageous and intelligent, with a screw loose. How convenient of a description, as 'Lostmyhead' follows, continuing an annoying pattern they have to put their finger up to grammar and forget about spaces and/or capitalization (// T H E I R  T W I T T E R  I S  P A I N F U L //). The song threatens to never get started, and just as it does, withdraws from existence.

'Loving Someone' is the arguably the best moment, in a large collection of 'moments', on the album. The collection of sounds that backup his near rap delivery provide a backbone for the message of loving someone. It sounds like their contemporaries 'The Neighbourhood' who they toured with a few years back, but it sounds just like they should be sounding all the time - unique. The title track provides several acts worth of nursery style music, but made for gigs, and clubs later on in the song, embodying the lovely message the title brings with it.

Before this review becomes as long as the 75-minute album, it can be said this is a brilliant collection of pop-alt songs. The singles sustain the album, it has to be stated, as otherwise it is a large collection of sounds that don't corroborate with the art they try to portray. Ignoring all the annoying media frenzy - and PR issues I have encountered with the band - this is well worth the time you would need to invest to digest this cynical album. This won't reinvent the wheel, as they clearly so wish they could do, but it can be laughed at, yawned at or danced to all at the same time. Both brilliant and boring in places, how many times can you say that about music?

'i like it when you sleep, for you are so beautiful yet so unaware of it' is out now (although, rather annoyingly, not on Spotify until March the 11th).

Email ThisBlogThis!Share to TwitterShare to FacebookShare to Pinterest
Labels: for you are so beautiful yet so unaware of it, I Like It When You Sleep, Reviews, The 1975

Ocean Flaws have finally released their debut EP after a year of hard work. I interviewed the band over at The Verse, which you can read here, and have had the pleasure of having their 'Dancing To The Fear' EP for a week. Read on to see what I think of the band's release. 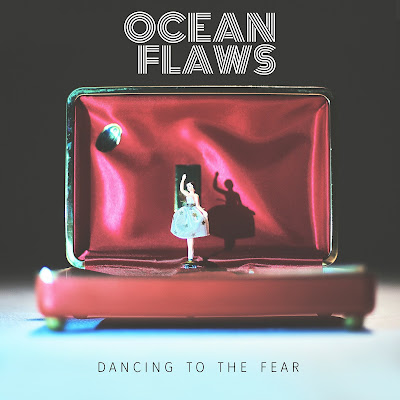 The EP kicks off with 'Intro', and provides an insight into the ambition of the band and what you're about to listen to for 18 minutes. Saxophone and reverb-heavy guitar starts off before a more piercing guitar comes into focus. The treble-heavy guitar and behind the pickup guitar play is welded together by some light drums before the first main track starts.

Mojo kicks off the album with a fantastic intro full of layered sounds. Whether it is the phaser guitar, the drums or the vocals - there is something to enjoy on this track. The backing vocals are a real addition to the track, as is the varied guitar in each verse, adding a sense of creativity often avoided with copy and pasted guitar work. Freedom always produces great lead guitar, and this is a fantastic example of that. The drums by no means are your normal indie drums, as they quicken at the right moment and take a backseat just when they need to. The build up is fantastic towards the last chorus, with the pedal twiddling guitar delay creating another layer to add to the song.

Having already heard 'Like a Fool' years ago, at first it was disappointing to see it make a reappearance. However, they have done a superb job of it. It may seem lazy to redo an old song, but there is sufficient evidence here to say this was not a quick rework of the song. Anyone who has been to see them live will know they have been reworking the song ever since release, improving it part by part. The bass is far more prominent and superior to the original bass lines, and the vocals are delivered more confidently, with emphasis on key lines throughout the verses. You can check out the video to the song below, shot at a school very close to home:

The title track, 'Dancing To The Fear', is a slower number from the band. Starting with harmonic guitar and a large helping of reverb, the vocals come in with a tale of liberation. The drums thump as they introduce themselves. Vocals are at the forefront of the track, and it makes a bold statement by the band. As guitar strum their way through the second verse, the track comes into its own just before the 3-minute mark with some delicate guitar reminiscent of The Maccabees 'Given To The Wild'. This is a great example of how music does not have to be full to the brim of lyrics all the time, or even drums or using all the members of the bands strings. The song ends as it begins, rounding off my personal favourite track of the EP.

Recently unveiled, 'Silver Screen' would not be out of place au cinéma. Bass starts the song, and then drums begin to take part. The vocals are probably the weakest on the album for me right at the start, but the guitar is teasing bigger things as the drums plod along in the background. The bridge is fantastic - hinting at the chorus, before pulling back to a guitar line that Foals wish they had written. They'll be jealous as fuck, this song is catchy.

Not once does this EP try to copy each anyone else, or even copy their past as 'The Shermans'. This is a promising sign of a new direction, and I wish them all the best. There is no self-indulgent bullshit that big bands like The 1975 and Kanye West can get away with, and I'm sure they will be the first to say they don't plan to ever to do that.

I really hope these guys go far, as they truly deserve it, and this EP is evidence of that.

'Dancing To The Fear' is out now.

Check out: Mojo // Dancing To The Fear