The Arctic Monkeys stormed Finsbury park on both Friday and Saturday of the late May bank holiday, with an impressive stage set to boot and a very loud 70,000 ensemble of true fans.

The bill suited them perfectly. Royal Blood were absolutely rocking, and are definitely less like the White Stripes then The Black Keys are. These two boys don't muck about, they don't have anyone else on stage. "Let me introduce you to the rest of my band" singer Mike Kerr announced proudly, "this is Ben Thatcher". Ben is one of the hardest hitting drummers I have seen, nearly always breaking drum sticks - and they only play 5 songs at a time. Mike, somehow uses just a bass to create that wall of noise. Pretenders they are not. They will be big as soon as they get around to releasing that album of hits. I did hope for a July release, who knows maybe they will announce it soon after the two biggest gigs of their careers? 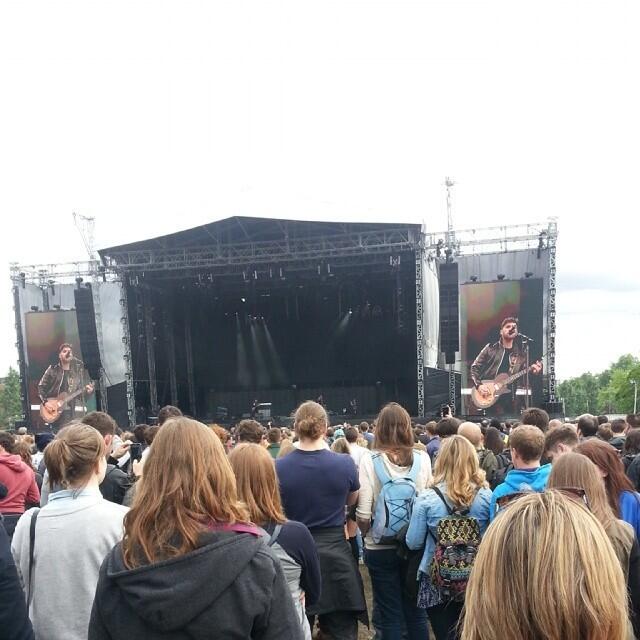 Miles Kane followed and was as always full of confidence, cheekiness and smiles all round. I particularly loved him toying with the camera and visibly having a laugh with the drummer whilst doing so, announcing to the crowd "that isn't loud enough Finsbury" slyly into the overly-fixed camera. The drummer as always is phenomenal, and looks amazingly like Arshavin and about 14 years old, still. His ability to have a joke with the band and keep the beat to 'Rearrange' is astounding. He still needs to have another album of hits behind him, lest we not forget most of the big hitters on the first were written with or by Alex, and the second with Paul Weller.

Tame Impala were... tame. They did not suit the barmy crowd. Musically talented, and the absolute tunes that are 'Elephant' and the Beatles-esque 'Feels Like We Only Go Backwards' doesn't make up for a lack of enthusiasm, and doesn't create an atmosphere of euphoria in the company of thousands of northerners. Let's leave it at that, shall we.

Then the main entertainment arrived, after 20 minutes of very odd choreographed collection of animated clips. One included wax brides you'd find on a cake slowly burning over a minute whilst Bowie played in the background. Pretty damn odd. What was not odd however was the mammoth noise level when the now accustomed intro to their gigs rang out. What was unbelievably classy was as soon as the beat kicked in, it was revealed that the stage span round, with the band in full swing with 'Do I Wanna Know?'. Very cool.

Alex Turner was quite visibly pissed out of his face, but rocked a Dracula look for some reason. Not sure on that, maybe one of his Sheffield mates told him it looked good?

The setlist was a bit odd for the band. They only played two songs each of their first  and third albums, with only three from their second. Humbug is an era I really crave to hear again, but they were not in the mood to hang on nostalgia. 'AM' was played in full minus one song, which is pretty much a non-issue considering its strength, but considering they had brought back older hits recently into their set like 'Dancing Shoes', it would be nice to see a few more. 21 songs is not enough songs for a band whose songs are not particularly long, and only play their biggest headline set yet for an hour and a half. Less cocaine, more songs. I know the mixture hits him hard brick by brick, but snap out of it and play some more hits, and less practicing of those lines, please. 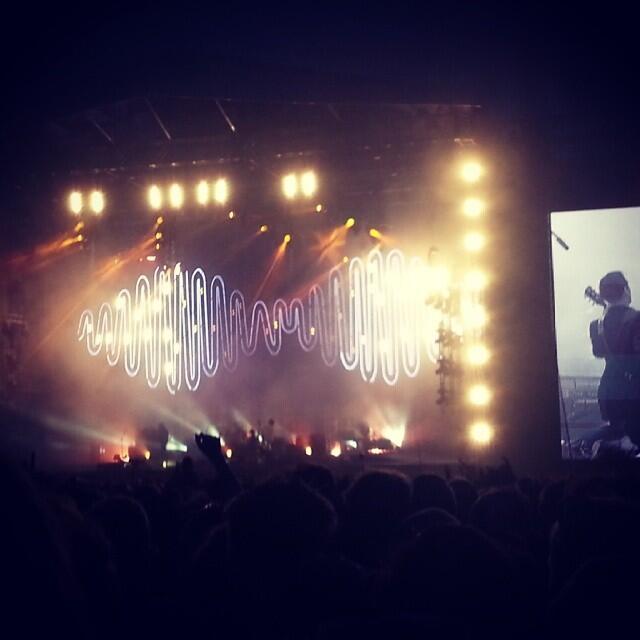 The gigs were a resounding success, and they proved that they have nothing left to prove to their fans. Now that they've achieved that, they can next time release new music and start playing *finally* a longer set, and they'll be hailed as Jesus figures by NME. Then they'll be a bank holiday for their birthdays, if they got their petty ways.

Alex played an acoustic version of 'A Certain Romance' on the Friday, instead of The Last Shadow Puppets performing on stage to play 'Standing Next To Me' on Saturday. It was accompanied by some funny interplay between Miles and Alex: "What should about the solo Milesssss", "I'm not sure, maybe sing some French? (sings French)". Hilarious and brilliant - oddly, Miles did not come on for '505'. Can't wait for their next one together, despite no-one around me knowing any of the words. 'Fans', eh.

You can see the setlist they played on Friday in full below:

Bloom FM // Not shutting down, yet

It was only last week that I heard that promising start up Bloom FM were shutting down.

But, today they sit with 17 companies ready to invest.

It came after two blows to the company. The first, a strong upper cut, was Apple banning their iAds. Stupidity at its finest - Apple can't beat them, so won't join them, but try to kill them off. Nice!

The second hit, a knockout blow, was the funder pulling out, a complete shock the CEO said.

But, on Twitter they have been advertising for a funder, and it seems they have several interested parties. With no adverts and great advertising, the company are destined for great things.

Let's hope the money is enough to keep the streamer advert free!

Linkin Park // Until It's Gone - Video

Linkin Park have unveiled the first single of their new album, 'The Hunting Party'. The single, titled 'Until It's Gone', continues the promise of a throwback to their first two albums, with first class engineering and a heavier guitar sound. It follows their last two albums that I felt were pretty awesome, but were much more electronic and mainstream for sure. Now, the guitar is firmly at the front.

I read an interview with Mike Shinoda who said that he asked the band if their 15 year old self would be happy with their recent music. They wouldn't have been, as they were listening to heavier music, such as Metallica, so hence the slight, grittier change in direction. It's a shame Mike isn't in it, even if it was a short verse like it Burn It Down.

You can read a very interesting review with their guitarist, Brad Delson, here about the recording process, which hints at solos and riffs galore, with new pedals and effects to boot. I respect a guitarist who freely improvises, and with the freedom he has to shy away live, perhaps it provides the perfect habitat to gloriously free-roam over his guitar - and the music.

The song, in my opinion is fantastic. You can watch and listen to the video below.

I still can't understand why bands bother with lyric videos. a) you miss out on views when the full video is released and b) when it is done this well, surely it is just throwing money into a black hole?

A bloody good, money-making black hole at that.

The Shermans are back again, with a turbulent new single from the Essex now four-piece indie band.
Turbulent, as in amazing. Their single this time is a more toned down affair, but with a cracking performance from every corner, with more prominent bass and a good mix all round.

The lyrics are strong, the beats strong and the chorus is, rather importantly, catchy. The breakdown after the second chorus reveals precision and patience, something bands lack these days.

The result is a four and a half minute indie anthem. I've linked the track below rather deliberately than embed the track, so you can check it out,and hear their other tracks and EPs.

http://soundcloud.com/theshermans/the-shermans-hurricane
Posted by Unknown at 20:49 0 comments

Email ThisBlogThis!Share to TwitterShare to FacebookShare to Pinterest
Labels: Reviews, The Shermans

Bloom.fm // Shutting Down This Month

Bloom.fm has announced it will be closing its doors less than a year into its business as a music streamer.

Citing an out of the blue investment pull out, and Apple ignorantly blocking their iAds on the grounds of it being a competitor, they have been left in a 'poetically crappy' state of affairs.

This is really sad as the service allowed me to pick a genre, a decade or even a festival (cool, right?) and stream always great music to my hearts content - ad free.You could even borrow up to 10 tracks, for free also.

One of the best party music apps is no longer with us. Today is a sad day for music.
Posted by Unknown at 22:00 0 comments

The Horrors latest album has been a long time coming for some, and it is finally close. Just less than a week away, you can help illuminate Luminous - clever! You can do this by listening to the stream below, and sharing it to unlock more tracks.

The first song is just... well worth the wait. Farris's voice is incredibly unique, he's really mastered it. Along with the two singles, this is shaping up to me a potentially album of the year, like the last two.