"So how was your weekend?"

That's what I expected to say on Monday morning. But, after 32 extraordinary hours, I was ready to tell a different story.

"Oh not much... just met Miguel, drummer from Tribes, who was very, very awesome, got a picture and signed my shirt.. oh yeah, and met THE DOCTOR, MATT SMITH ASJDASLJ."

Ignore that bit at the end, sorry about that - I'll explain Matt in a bit. But yes, I needn't tell you that Tribes was amazing. The setlist was really well thought through. They played (I think) 3 songs that weren't on the album, but were from early EPs - glad to see they hadn't left the excellent older material behind. You can see a YouTube video I found below to get a picture of how good the atmosphere was in the Bush that night:


The best part had to be waiting outside the stage door, behind a silly security barrier and even sillier security guard (you could just run round the other side, more on that later). Miguel came out after 5 minutes or so and greeted some friends from Camden before coming over. I just asked him for a signature and he was more than happy to do so and even gave me a great profile picture in the process - ignore my face, it was such a random occurrence I didn't know what to do!

And here's the signed shirt: 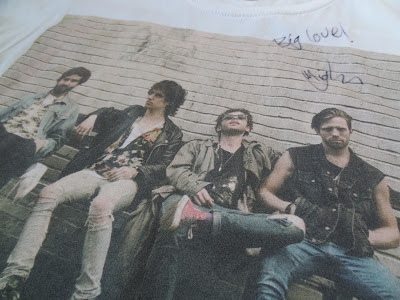 Big Love indeed Miguel. Now, you can imagine I was absolutely ecstatic. They are one of my favourite bands at the moment, and having just released a debut album in January, I am looking forward to a bright future for these Camden boys.

I MET MATT SMITH. After the gig, we waited for the band and Miguel came out promptly. Then, out of nowhere, the Doctor strolls past security after a bit of an argument and gets past it to get to the stage door. At this point everyone was looking at each other like "...why's he here?" so me and my friend naturally think straight away to sprint round to meet him. I'll brush over the fact it was one building to the left, compared to my running route of 29509 to the right.

Me and Callum got round and walked over, and stood about 3m from him, patiently waiting for him to finish his argument about trying to get in. "I'm very good friends with the band, I don't need a wristband to get in" could be heard. I wasn't sure whether he was or if he was just using his celebrity status. He then walked off past the gate, which the security guard gave me a "how'd you get there" look, and he then strolled into the now closed venue. But then out again and across the road. Couldn't get a taxi. Walked back inside the venue. Then out. By this time I thought I'd leave the man alone and be on my way before noticing he'd stopped to take photos in the corner. Queue sprinting and the lucky photo you see before your very eyes above you. Thank you, for stopping Matt Smith.

And thank you Tribes for being as amazing live as I expected and remembered from Latitude last year. Part 2 in a bit, and my Bombay experience.

Probably the most perfect 32 hours of my life

Hopefully, anyway. Tonight I will be seeing for the first time since Xfm's Winter Wonderland Tribes! I love this band to pieces, and cannot wait to see them once again. I've been listening to 'Baby' non-stop since it came out - and the singles way before that. I don't care that they 'copy' so many bands, I just like how they bring it all under one really cosy umbrella that I enjoy. Shepherds Bush Empire will make it all the better, too. It's a great venue if standing, and hopefully will meet Johnny and the rest after!

Secondly, I'm getting paid for not going to work. Yes, that's right. I booked 'holiday' so £25 purely for doing what I love: gigging.

Also, I'm seeing Bombay Bicycle Club tomorrow. I love this band EVEN more. They're just delicious to my ears, and just as near to perfect as possible. Their first album was sensational in my eyes, and grabbed a hold of many music lovers ears. The second album took everyone by surprise, but their back to electric third album brought them to the limelight once more and really pushes them up one notch. I can't wait to see how they are received at both Reading in August and Ally Pally on Saturday. Might even see them too.

So yeah, nothing special really.
Posted by Unknown at 15:20 0 comments

At exactly 2:49pm on Monday the 9th of April 2012, Tribes followed me on Twitter. This has literally made me unbelievably happy, and re-enforced my love for the great band that they are. The fact they have time to break away from already recording their second album, touring - and even on a bank holiday - to follow a mere (dedicated) fan like me, is just great.

They still aren't that famous, and my friends constantly tell me to shut-up about them. But I honestly believe they're what music today needed and I hope they go on to prove me right. To be their 44th person to follow on Twitter is just awesome, and I can't wait to see them at Shepherds Bush on the 27th of this month. Oh and Reading, whenever they decided to finally announce they're playing there.

P.s. Thank you Charlotte Fewins for mentioning me in the tweet that basically resulted in me getting followed. Oh, and to Johnny, you absolute star.

Planning my 'how to run a festival' EPQ

First of all, thank you to everyone that filled in my survey, all twenty of you. Fingers firmly crossed that it shows how hard it is to pick bands for a festival and please everyone in the audience.

This is for my Extended Project Qualification, EPQ. Mine is on what factors are there in order to run a successful music festival. So in simple terms what are they?

Yes, there is much more to a festival, such as volunteers and advertising. But as I get started on this I'm sure even more will arise.
Posted by Unknown at 19:03 0 comments

Survey: Which 8 acts would you and wouldn't you want at a music festival?

So basically for my EPQ I've chosen something that actually interests me compared to what I've heard most people are doing. I'd be really grateful if you could complete the below survey, which will hopefully prove how hard it is to please everyone at a music festival!

For any acts that aren't there, such as Justin Bieber or Eminem, just put them in the 'other' field at the end of the question!

Also, to cover my own ass mainly, this is if you created your own music festival. Not the one you are already going to as someone thought it was!

Tempting fate: The King Blues are no more.

When I said "Who's next?" in my blog yesterday, I didn't expect bands to be queueing up or anything. Nonetheless, today The King Blues announced after their new album comes out in July called "Long Live The Struggle" they will split. They say they feel they have taken things as far as they can go, and do not want to cause a scene like some bands do when they split up, ala Oasis.

Email ThisBlogThis!Share to TwitterShare to FacebookShare to Pinterest
Labels: News, The King Blues

'Viva' Brother? // Apparently not, thanks to NME.

Yesterday Viva Brother officially announced they were splitting up - perhaps announcing this on April Fools' Day wasn't the best idea, as many fans didn't believe it, with many being over the moon. I contacted their manager who replied in his own words to my question if they had split up with "Tis true" (I know what you're thinking, how lazy). He also confirmed this once promising band had already finished their second album. Whilst many thought this band were the next Oasis, the next big band for NME to launch into the limelight, they just never made the cut, with a poorly received debut album and abusive comment after abusive comment about their 'copy cat' style of music.

They formed in late 2010 and signed to EMI in November of that year. Things looked up for them in 2011, with NME running several articles about their singles and covering one of their tours. However, they later came back to bite them. In what would probably be their last every tweet, Viva Brother wrote "And as for NME. Shame on you.". So how did this comment came to be and why did it end so badly for such a 'promising' band? In their first NME appearance they were proclaimed as band of the week in late October of 2010, with every sign of making it big. The band boasted "people might think we’re arrogant, but it’s just belief. We know how amazing we are." and NME gave them their shot at the lime light, with their stamp of approval, as did many other blogs and music magazines.

But things didn't last for long. Once the album was finally released in August 2011, after being forced to change their name from Brother to Viva Brother due to a legal battle, their career slowly started to go downhill. It was poorly received, and music fans agreed. Whilst the music wasn't atrocious, it was blatant in it's rip-off nature of Oasis and other britpop bands. The NME gave the album a 5/10 slating it as formulaic and that other bands are just "writing better songs."

Then the NME awards of 2012. They were nominated for Worst Band of the year. That is some feat, from going from the 'next big thing' to the 'current worst thing'. With 170,000 less views than another NME hype band, Tribes, who have been around for a similar time, the magazine clearly can have a massive influence. But the need of good music is also still a requirement in today's music, no matter what.

Their last song to be recorded was posted on YouTube yesterday following the announcement. Annoyingly, it doesn't sound that bad, aside from the cliched and not really thought through lyrics ("I don't want to be loved, but I need to be loved.") You can view the song below:

Viva Brother have every right to be annoyed at NME for them building them up before letting them down with a heavy thud - now, who's next to fall off the hype train?
Posted by Unknown at 19:41 0 comments