The long time coming effort from BBC does not need or require much talking about - they are after all one of the most hyped bands of the year. After their first EP "Forever" came out, it feels like we have been waiting since, er... forever for the full length debut. Now it is here in all it's shimmering pop goodness.

"Shimmering pop" is what I least expected to write after their lively, rocky shows. After a big time record deal, they have been slowly, but carefully, crafting what can only be described as a superb pop album. Pop in the sense of good music, and good production too. The now classic "Falling" makes them sound like this is of their fifth album, not their first. The chorus and hooks are a plenty, as is the 80s style guitar. The same goes for "The Wire", essentially their own "Pompei" moment before stardom. It is lavished with 90s pop similarities and it is spectacular. 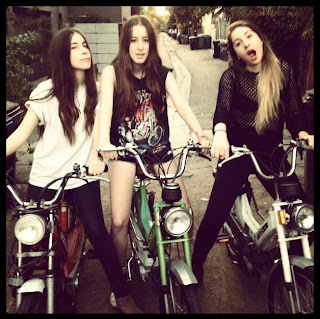 However, "My Song 5" is the stand out track for me. It sounds like Timbalands successor has locked himself away and listened to 29 different genres and loaded up on cocaine before producing this stunner of a track. Layered layers and stunning bass and vocal work really help push this song to the forefront of music. This is special. Only criticism of this would be that Go Slow should be a part of "My Song 5", now that would make it very special indeed. "Let Me Go" builds on this rock sound further, and nearly as good too, with a sleuth of effects too.

There is traditional 80s pop fused with 2013 to be found on "If I Could Change Your Mind" and title track "Days Are Gone". I found the two recent singles "The Wire" and "Fallling" too similar to expect any sort of variety, but this album does deliver variety aplenty. Whether you're looking for rock and roll, or pop, you have it in front of your popping eyes.